By Christianarena (self meida writer) | 1 months

Mark Eliot Zuckerberg, born in 14 may 1984, in USA, is an American philanthropist, tech entrepreneur and computer scientist. He is one of the most successful tech entrepreneur in the world. He is popularly known for making Facebook, the largest social media site in the world with more than a billion active users per month. Recently, mark Zuckerberg and his company have acquired WhatsApp and Instagram. In addition to, he is very rich and according to Forbes, he was the youngest billionaire in the world at just 23 years old in 2008. Let dive in and look at the most amazing facts that you don't know about mark Zuckerberg.

1.He is color blind According to different sources, mark is red-green color-blind and the best color he can see is blue. That's why Facebook website and mobile app is blue in Color in honor for him.

2.He is a vegetarian 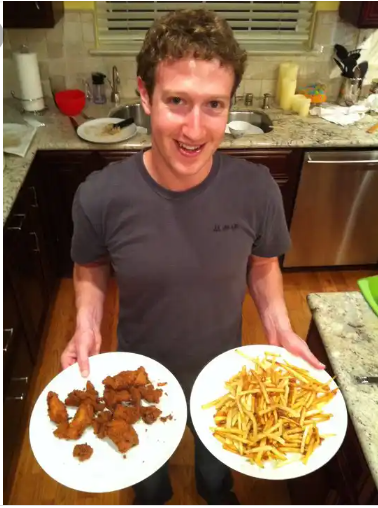 Mark Zuckerberg became vegetarian back in 2011, according to reports from new York. He said he can only eat from the animals he has killed himself.

3.He has made other websites and applications before Facebook Mark is reknown for inventing Facebook but he has made other websites and apps for instance In 2003 he created facemash to connect and match college mates whereby he experienced critics in the movie: Social network. Facemash which he created in 2003, preceded the Facebook. On top of that, he owns a website called Zuck.net among others.

4. He dropped out of college Mark joined Havard university after completing high school studies at St Philip and Exeter school. However he dropped out of college inorder to focus on the project to make a social networking site in February 2004.

5.He always closes his Macbook's laptop webcam and microphone jack Mark is worried about black hat hackers because at sometime, his Facebook profile was hacked. So to prevent this, he covers his laptop camera and microphone jack with tape

Content created and supplied by: Christianarena (via Opera News )

Exciting Photos Of Bahati Being Vaccinated

Wabosha Maxine Shares Her Secret To A Flowless Skin

Angry Manchester United Fans Demands For Actions To The Glazers