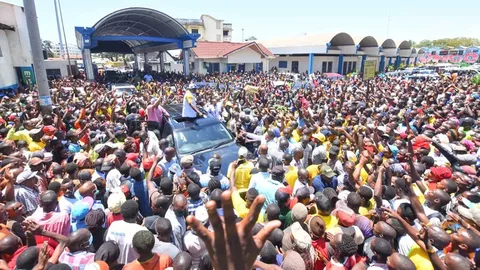 The former premier promised that under his governance, a social welfare program would be rolled out, reaching at least 8 million people in just a single year.

According to the Mr. Odinga, the programme would help bridge the gap between the poor and the rich in the country.

On Saturday, however, DP Ruto, who is on a three-day visit of the coastal region, said Kenyans, particularly those who are jobless are not interested in monthly payments but continued opportunities.

According to the second in command, when he commenced the conversation about the bottom-up economy model, everyone was quick to criticize him, especially his rivals who have now conveniently joined the Hustler-oriented narrative.

According to the Uhuru's deputant, now that he wants to be the country’s fifth president, the story has changed and he has become the dark horse.

Ruto said he was aware of a plan to obstruct his presidential ambition with all his competitors teaming up against him but said he had the people’s power.