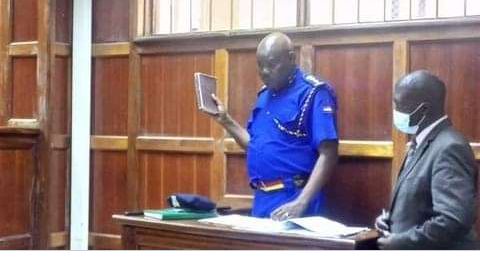 Kasarani OCPD Peter Mwanzo emotionally narrated how he was conned a whopping 597,100 Kenyan shillings within 12 hours.

The money was withdrawn through an agent in Bomet. At first, he received calls from a private number on 4th January. He declined to pick but the person kept disturbing through numerous calls, thus prompting him to switch off the phone so as to avoid more disturbances.

He switched on the line after some time but to his surprise, the line didn't pick network. The following day, he visited a Safaricom shop and was advised to do a line replacement.

After replacing the line, he tried buying airtime from Mpesa and sending money but the transaction failed and he received a message that he had exceeded his limits. He later received messages that he had registered with Fuliza and Airtel, something that he had never done in his life.

He immediately requested statements from his equity account and Mpesa and to his surprise, his accounts had been swept clean and the money withdrawn in Bomet in installments of 150,000 and 147,000 Kenyan shillings.

After investigations, the DCI discovered that his SIM card had been swapped by someone in Nairobis Donholm.

He sued Safaricom for continuously keeping a system that can be easily manipulated by fraudsters since he had never shared his personal information and PINs with anyone.

The court has already summoned legal teams of Airtel, Safaricom and Equity. The hearing is set to take place on 26th June.

Good News to ECDE Teacher's Over Salary Increment In New Guidelines as Announced by Gov. Waiguru

What Do Guys Look For In A Girlfriend? 6 Really Essential Traits Every Man Looks For