By Kenyanews.com (self media writer) | 10 days ago 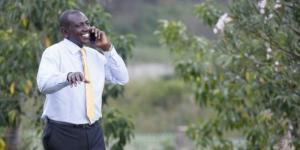 A woman was shocked to find out that the man she was negotiating with on a phone call was Deputy President William Ruto.

The unidentified woman was called by a man who owed her money identified as Michael Kamau. He was a guest of the Deputy President at his Karen office.

Kamau met Dr Ruto and they had a conversation on his dairy farming and tea business which he said were struggling because of the current tough economic times.

The DP promised to help Kamau get his dairy farming business back on its feet by giving him a small loan. The farmer then called the woman who sells him dairy farming inputs and explained that a debt he owed her would be paid.

He handed the phone to the Deputy President who introduced himself as Kamau's friend and told the woman that he would be settling his bill. The seller asked Ruto to take the till number where he would deposit the money.

"Michael is my friend and he has told me he is your customer and he has also informed me that he has been struggling and so I will give him a loan to handle his dairy business. So you will give me the till number and I will send you the money," the DP stated.

Ruto went on to ask the woman where she buys her supplies and she informed him that she gets them from millers. She went on to tell the DP that she had done the business for 29 years.

"I buy materials from millers, they have everything. I have done this work for 29 years and maybe you were not born when I was starting out, I am probably your mom's age," she stated.

The woman asked the DP what his name was and Ruto told her his name is William. She was surprised for a moment and asked if it was the deputy president.

Ruto laughed and asked her why she presumed it was the DP and the woman explained that she has had the deputy president's voice on television before and the voice sounded familiar.

DP Ruto has been showing his generous side during this campaign period as he interacts with his supporters in various parts of the country.

Ruto was on a charm offensive in Migori County on Saturday, September 25, 2021, when he spotted a woman with an umbrella and paid Ksh20,000 for it, much to the delight of residents who cheered him on.

He asked the woman to pass him the umbrella as it was drizzling and in return, he asked his aides to give her Ksh20,000.

In yet another incident, the DP was seen having a private conversation with a young man on crutches whom he gave Ksh20,000, much to the excitement of those in the crowds.

The crowd cheered when they saw the DP acknowledging and gifting the young man before he was lifted back to the crowd by his friends from the DP's motorcade.