The Biography of the world's richest man:Jeff Bezos(Founder and CEO of Amazon)

By Alhan (self media writer) | 8 months ago

Bezos is the founder and CEO Amazon. He is currently the richest person in the world. 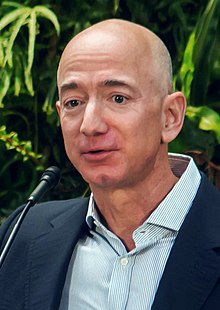 Born in Albuquerque and raised in Houston and later Miami.He graduated from Pricenton University in 1986. He possesses a degree in computer science and electrical engineering. Bezos founded Amazon in late 1994. The company began as an online bookstore and has expanded to a wide variety of other e-commerce products and services, including audio and video streaming, artificial intelligence and cloud computing. It is currently the world's largest online sales company.

He also purchased The Washington Post newspaper in 2013 for $250 million, and manages many other investments.

The first centibillionaire,Bezos was named the richest man after his net worth increased to $150 billion in July 2018.In August 2020, he had a net worth of over $200 billion.In 2020 during the Corona virus pandemic Bezos's wealth grew by about $24 billion.

On February 2, 2021, Bezos announced that he would step down as the CEO of Amazon sometime in the third quarter of 2021, and transition into the role of executive chairman. He is to be replaced as CEO by Andy Jassy,the chief of Amazon's cloud computing division.

Content created and supplied by: Alhan (via Opera News )