MCK plead with the public, police and security of VIPs to recognise the use of phones by journalists

By Olmoran.news.com (self media writer) | 2 months ago 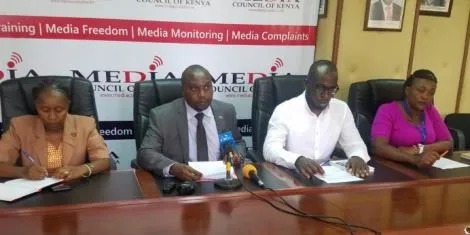 The Media Council of Kenya (MCK) has asked the public, police officers and security of VIPs and VVIPs to recognise the use of mobile phones by journalists in their line of duty

However, Omwoyo gave conditions in which portable devices can be used by media practitioners.

"The Council wishes to clarify that Mobile phones are now being used to not only take photos and videos but also record voice clips and undertake live broadcasting including live links.

"Professionally trained and accredited journalists and media practitioners should be allowed when needed," the statement read in part.

Omwoyo declared that journalists should comply with security agents and show proof of their accreditation status whenever they are called to do so.

MCK explained that this would help reduce the number of incidences where journalists are harassed by security officers during events.

The CEO, however, pointed out that journalists must adhere to the code of conduct even with the new freedom granted to them.

"Journalists and media practitioners are advised to adhere to the Code of Conduct specifically Clause 8 which prohibits the use of hidden cameras or phones unless there is no other way to access the news," Omwoyo wrote.

In addition, the Council called on universities and colleges offering media-related courses to include the use of mobile phones in their curriculum.

Omwoyo petitioned media organisations and professional support groups to encourage the use of smartphones in the practice.