By Dejong3 (self media writer) | 6 months ago

Louis Antoine of France was born on 6 August 1775 as the eldest son of Charles Phillippe. In April 1800, he took command of a regiment of cavalry in the Bavarian army and took part in the battle of Hohenlinden against the French. He served for only 15 minutes before his abduction

Jehoash was 7 years old when his reign began. According to the Bible, he was the son of Ahaziah who was killed in a rampage. After being hidden in the temple for seven years, he was crowned the king in the coup against Athaliah the king. After a reign of 40 years, his servant Beth Millo assassinated him as an act of revenge for the blood of Zechariah (2 Kings 12:1).

Longest and shortest-serving king of Israel.

Manasseh was the 14th king of the kingdom of Judah who was the son of Hezekiah. His reign was so evil and lasted for 55 years (696-642 B.C). King Zimri was the shortest-serving king of Israel only serving for 7 days. He ended his own life after the people rebelled against him and attacked his palace (1 Kings 16:15-). 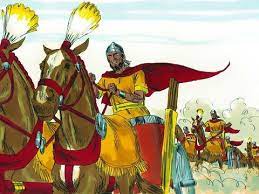 Content created and supplied by: Dejong3 (via Opera News )