By QwinTessy (self meida writer) | 26 days 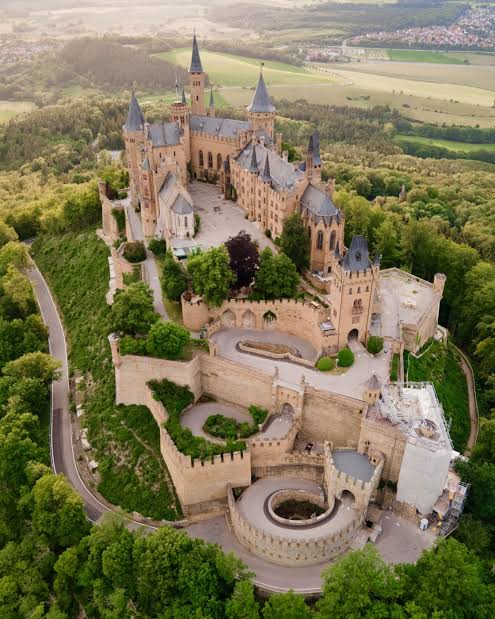 The towering Hohenzollern Castle remains one of Germany's most visited palaces with its fairytale views, despite being largely uninhabited since the 18th century.

The high-walled fortress of Hohenzollern castle sits atop a daunting hill surrounded by Germany's Black Forest. It is bounded to the west and south by the Rhine Valley, and towers regally over the town of Bisingen on a mountain bearing its own name, "Burg Hohenzollern." 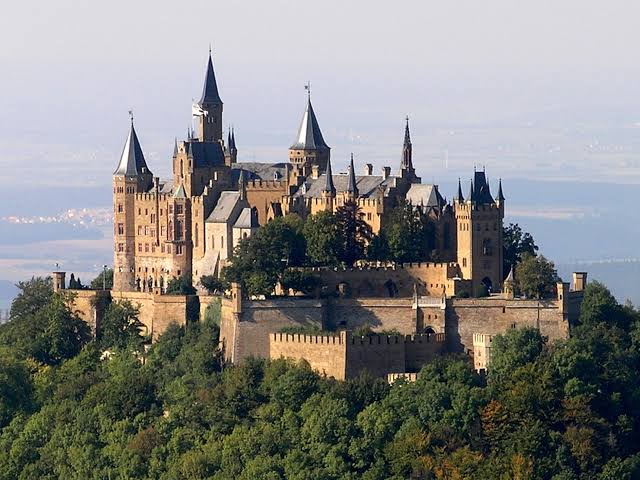 The castle is the ancestral seat of the House of Hohenzollern, a former royal German dynasty, and it is now owned by Prussian Prince George Frederick, the new head of the Hohenzollern family's Prussian branch. The royal family flag flies high on Hohenzollern tower when they visit.

Hundreds of thousands of tourists visit the lovely neo-gothic castle built of golden-hued bricks each year. It has a substantial art collection, as well as a treasure trove of jeweled objects and an open-air cinema. It also has its own brewery, as well as a special brew known as Pruessens.

Despite its magnificent features and medieval past, the Hohenzollern palace has been vacant for decades.

Hohenzollern Castle is the third of three hilltop palaces named after the royal German family Hohenzollern that were constructed on the Hohenzollern mountainside.

The "Hohenzollern mountain" on which this regal palace sits is known in German as "Burg Hohenzollern." 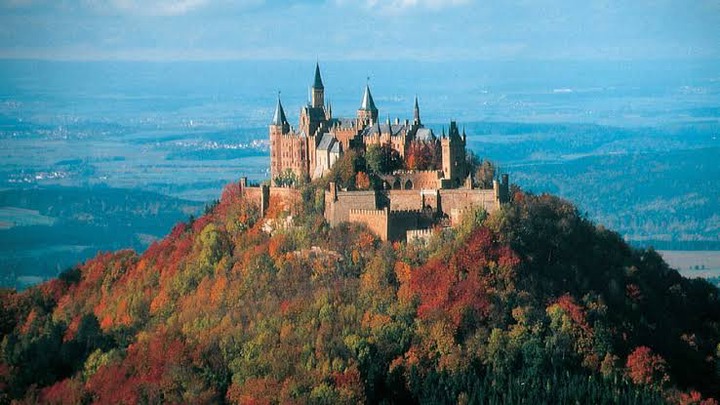 The castle was called "the most fortified house in all of Germany" when it was first mentioned in history in the early 11th century. However, in 1423, the palace was totally demolished.

In 1454, work on the second castle began. This castle, however, was taken over by the Austrians in 1634 and remained under their control for the next hundred years. It was then occupied by French troops before being restored to Austrian rule following the War of the Austrian Succession.

It was scarcely occupied by this time, and after the last Austrian owner left in 1798, the mighty palace began to crumble.

The castle that now stands on Hohenzollern Burg was designed by Hohenzollern scion Crown-Prince Frederick William IV of Prussia. In 1819, he traveled through southern Germany in search of his ancestors, ascending Mount Hohenzollern to claim his ancestral home.

He reached the ruins of the castle and watched the sunset from one of the castle bastions and being the ever romantic one, he knew that Hohenzollern Castle needed to be restored to its former glory.

He commissioned architect Friedrich August Stüler to design the castle, which was completed in 1867 in the ornate English Gothic Revival style. Surprisingly, no kings have ever existed in this new incarnation.

The new lord, George Frederick, is the great-great-grandson and historic successor of Wilhelm II, the last German Emperor and King of Prussia, who renounced the throne and fled to exile at the end of World War I in 1918 as the eldest grandchild of Queen Victoria. 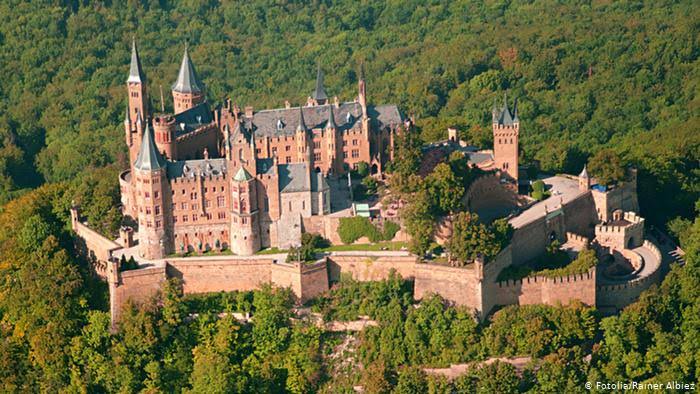 To this day, no one lives in the palace year-round, and few people outside of visitors are aware of what lies inside its gilded halls.

Tourists are generally forbidden from photographing the interior of the castle, so we must rely on written descriptions and publicly available videos to see the splendor inside.

Even though the castle is unoccupied, it is fortified with battlements and towers on the outside and has 140 rooms, gilded coffered ceilings, and marble columns on the inside.

The walls are adorned with portraits of Prussian royals. The Ancestry Hall, accessible through an external stairwell, houses the royal family tree and crests, which are color-coded and arranged. 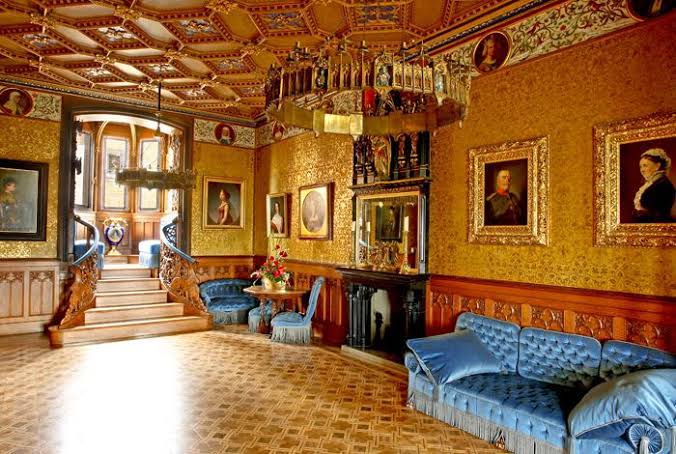 The Count's Hall is the next stop, with its rib vaulting, pointed-arch windows, and original wood flooring. Tourists entering this area must wear special slippers to protect the environment.

There are two chapels with stunning stained glass windows, as well as a library with murals depicting the history of the Hohenzollern family.

With its gilded walls, the queen's bedchamber is one of the most luxurious rooms in the palace.

The king's bedchamber, on the other hand, is very modest. It was more of a memorial than a sleeping room when it was rebuilt.

Overall, the interior is just as lovely as one might expect from a royal castle. 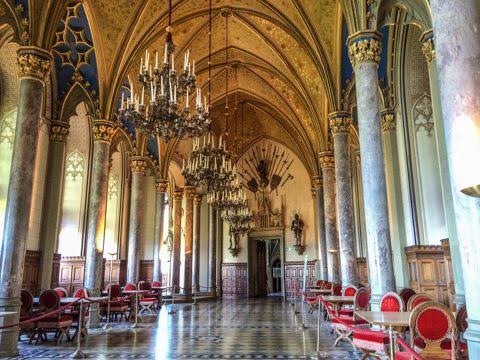 With a history as long and complicated as Hohenzollern Castle's, it's not shocking that many people believe the fortress is haunted.

According to legend, there is a "Lady in White" who haunts both the castle and the royal family. According to legend, Countess Kunigunde von Orlamonde was in a relationship with Albrecht von Hohenzollern, Duke of Prussia and son of Frederick IV. The countess, who had been widowed, was a mother of two children.

Albrecht and the countess were in love, but his parents were against the union. "If it weren't for four eyes between us," Albrecht told his love, he'd marry her. The countess mistook "four eyes between us" for her children and murdered them by sticking their eyes out with a golden needle.

Albrect was appalled that the countess could do such a thing, and he ended their relationship. The countess sought salvation at the Vatican, where the Pope ordered her to establish a monastery and devote her life to prayer.

She became the abbess of a Cistercian convent, where she remained until her death in 1351, according to legend. The Cistercian Order's habit is pure white, by coincidence.

Legend has it that after the countess died, she started haunting all of the Hohenzollern dynasty's castles. Anyone who saw her as an apparition dressed in flowing white robes was cursed with bad luck and even death.

It's a doozy, as far as ghost stories go. However, this is most definitely not the case. Countess Kunigunde von Orlamonde was said to be childless by historians

Nonetheless, with or without ghost stories, the tale of Hohenzollern castle is a tumultuous one.