Dedan kimathi was a maumau fighter born in nyeri. He led the mau mau worriors before he was captured by the british soldiers and killed, the ghosts of kimathi still lives to haunt the leaders of this country kenya who betrayed his dream of a united and prosperous nation. The only reward that was given to him was the naming of a university after him callled DEDAN KiMATHI UNIVERSITY . 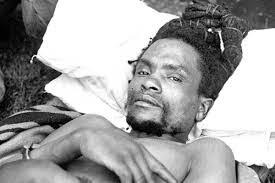 Kimathi is credited with leading efforts to create formal military structures within the Mau Mau, and convening a war council in 1953. He, along with Musa Mwariama and Muthoni Kirima , was one of three Field Marshals. His capture in 1956 and execution the next year diminished the uprising against the British colonial government. Kenyan nationalists view him as the heroic figurehead of the Kenyan freedom struggle against British colonial rule, while the British government saw him as a terrorist. Despite being viewed with disdain by the first two presidents of independent Kenya, Jomo Kenyatta and Daniel arap Moi , Kimathi and his fellow Mau Mau rebels were officially recognised as heroes in the struggle for Kenyan independence under the Mwai Kibaki administration , culminating in the unveiling of a Kimathi statue in 2007. [3] This was reinforced by the passage of a new Constitution in 2010 calling for recognition of national heroes.

French Journalist Pleading For Help In A Video After Being Kidnapped.