By MaclayN (self media writer) | 26 days ago

Mohamas Karamchand Gandhi was an Indian lawyer,anti colonial nationalist who led his country to freedom from British colonial rule in the year 1947. 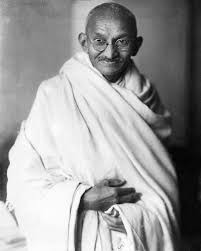 Born in Porbander,India, Gandhi studied law and organised boycotts in peaceful forms of civil disobedience.He led non violent protests and ran campaigns for the basic rights of every one and eliminate injustices that were common back then.He was a simple man who believed in and paractised the values of unity,equality, non violence,justice and honesty.

He had great leadership qualities such as discipline,acceptance of failure,persistence and also believed in people's empowerment and believed in walking the talk to bring the desired change.

Widely regarded as Mahatma or the great soul,Gandhi helped India reach independence through a philosophy of non violent non cooperation and is regarded as one of the greatest and most inspirational leaders of all time.On 30 January 1948,a Hindu extremist who was against his tolerance of Muslims fatally shot him three times in he chest and killed him.

Some of his most quotes include:

* "Where there is love,there is life."

*"In a gentle way you can shake the World."

*"The future depends on what we do at the present."

* "A man is but a product of his thoughts,what he thinks he becomes.

* "The weak can never forgive,forgiving is an attribute of the strong."