At least one police officer was on Friday, June 19, confirmed dead after suspected assailants exchanged bullets with police.

According to a police report filed at Garissa police station, the officers who were on patrol were attacked at Weradhe area where a shootout ensued.

It is reported that Police Constable Hillary Rugut was fatally shot during the incidence.

"It was reported by IP Peter Mwaniki In charge QRT Garrisa that today at 08:00am, he dispatched one QRT section on Routine patrol within Garrisa and its Surroundings, and on reaching at Weradhe area where they disembarked from a police motor Vehicle registration Number GKB 804H Toyota Land Cruser and started patrolling on foot,"

"All over a sudden unknown number of people fired at them where they exchanged fire. As a result one police officer, PC Hillary Rugut was shot severally on the back of the right thigh, where he succumbed to the injuries at the scene," police said in a statement. 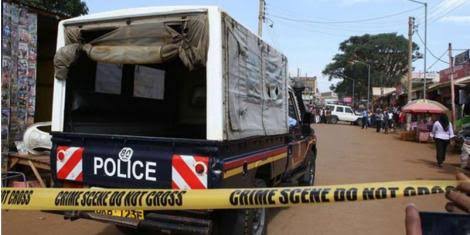 The attackers maneged to escape with where some fled with gun shot wounds.

Team of Combined officers drawn from KPS,PBU,and DCI have been dispatched to pursue the attackers.

Cases of attack on police officers have been rife since when the government effected the dusk-to-dawn curfew to combat the spread of the novel coronavirus pandemic which has since claimed thousands of lives worldwide.

How To Use The Nairobi Expressway For Manual Toll Collection (MTC) And Cash.

Jackie Matubia Excitedly Thanks Her Fans As She Hits Her Goal Of 100k Youtube Subscribers.

Congratulations to Jackie Matubia for achieving this.