By KENBETT (self media writer) | 1 year ago 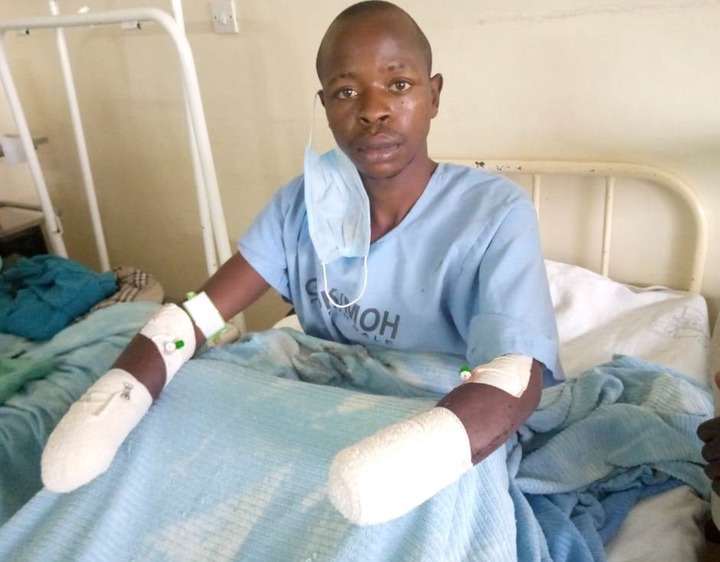 A 25-year old man is recuperating at Kenyatta National Hospital after his hands were severed by his brother-in-law over land dispute.

Ernest Kobia alias ndimu karaithe had both of his hands chopped off by an in-law at Tiira market Nduguto location, Meru County.

He was taken to Meru level five and later transferred to KNH where he is admitted since Wednesday for specialised treatment.

The assailant is said to have used a panga to carry out the amputation.

He is reportedly scheduled to undergo surgery on Thursday (today).

A cousin who did not want to be named so that he can talk freely said the pair differed over a bridge in a family parcel of land.

He said the suspect only identified as Mwenda was revenging after the patient assaulted him two weeks ago.

“Their issues started two weeks ago after Kobia destroyed the bridge before assaulting Mwenda. If the suspect is Mwenda he was on a revenge mission because he has also been nursing an injury inflicted by Kobia,’’ he said in a telephone interview.

He said Kobia was found unconscious after the Tuesday 9pm incident and was rushed to the hospital for treatment.

The kin called on the authorities to trace the assailant who went into hiding soon after committing the heinous act.

Igembe South Subcounty Police Commander Henry Onyango said the family were yet to report the matter with them for action.

"We've not receive the report on the incident yet but once we receive we will investigate ,'' said the Divisional police boss in a phone interview.

Land is an emotive issue in Igembe region.

Recently a judge in a ruling observed that the government delay in undertaking land adjudication process in Meru and particular Igembe region has fueled land dispute adding majority of over 500 murder cases in the court arise from the region.