By KibetKe (self media writer) | 2 years ago

The head of state HE. Uhuru Kenyatta together with the former PM, Hon. Raila Odinga, who are the two listed complainants against two suspects over a Computer misuse and Cyber crime Act's section 17. 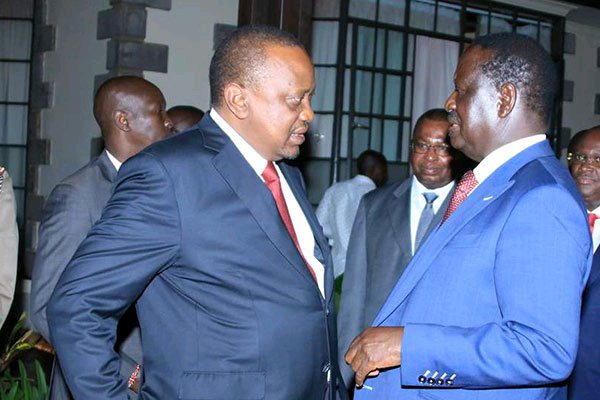 President Uhuru Kenyatta with ODM leader, Raila Odinga during a past meeting/Photo_Operanews

A nairobi court has directed the investigating officer to record statements of the President and the former PM within seven days as seen on Citizen Digital news.

According to the news outlet, the two listed suspects; Magoma Ayonga anad Rading Ambogo were charged with the “offense of unauthorized interception of computer data contrary to section 17(1) of the Computer Misuse and Cyber Crime Act.”

The court through the defence lawyer Danstan Omari was informed that one of the accused is apprehensive and psychologically traumatized as she fears for her life Safety.

“We had requested statements from the complainant who is the President of this country and Raila Odinga who were alleged to have been in the entourage,…to date those statements have not come,”court was told.

As earlier reported, the two are accused of intercepting security “CCTV footage capturing the Head of State’s entourage on June 2 at around 8pm on Kenyatta Avenue.”

“This alleged offence of intercepting a security CCTV does not exist in law. Our clients were never in State House and have never gone to any government installation to capture CCTV footage of government,” said the lawyer.

The lawyer, while defending the two individuals, described them as mere casual workers at a hotel in the city.

The CCTV footage captured the head of state while inspecting development works at the newly formed Nairobi Metropolitan Services together with the ODM leader. The case will be mentioned on 09th July, 2020. This is after the two, through their lawyer denied the charges.

Further, the lawyer had asked the court to be supply them with the original clip of the entourage that day.

Content created and supplied by: KibetKe (via Opera News )

IEBC Suspends Votes Tallying In One Of Raila's Strongholds