Eldoret Police Looking For Bodaboda Operators Who Burnt The Lorry

Few days after rogue bodaboda operators in Eldoret burnt down a transist lorry accused of knocking down a local resident at Annex Center police officers are hunting down the suspects behind the ordeal. 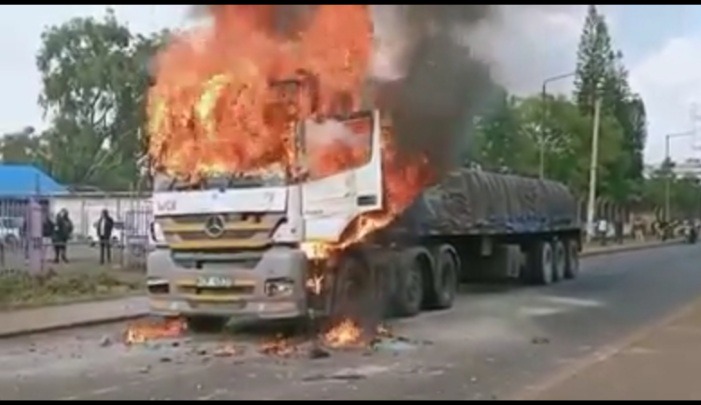 The police boss added that everyone is entitled to use the road and whenever the mistake happened nobody should take the law on it's hands but the issue will be addressed by security operators.

"We are all entitled to use the road nobody is above another even whenever there's misunderstanding the arsonist way is not an options to handle left the matter to security apparatus "said Johnson Ipara. However the bodaboda operators from Annex have expressed their disatfaction following the incident claiming that their name have been soiled yet they are not the one who burnt down the lorry.

The angry bodaboda noted that they will assist the police in looking for the suspects who are behind the evil act of burn the lorry.

According to residents the lorry knocked down a resident at Annex killing him on the Spot fearing the safety of his life he fled the scene to seek asylum at Eldoret police station but unfortunately on his way he was obstructed by huge jam in Eldoret town and the irate bodaboda got him burning the lorry. Annex centre is one of the busiest centre within the outskirts of Eldoret ,the centre is known as one of the destinations that long distance drivers take their rest before proceeding with their journey.

However the kenya Uganda highway that's passing through the Eldoret town is one of the busiest road many people have been accusing the long distance driver over reckless driving when plying the route.

Following the recent government decision to establish the bypass in Eldoret town it was one of the idea to dicogest the growing town and the lorries will be diverted away from the town.