By Bettyshii (self media writer) | 1 year ago

A house that is located along ruiru Kiambu road has given many kenyans sleepless nights and mixed reactions after it went viral on social media. 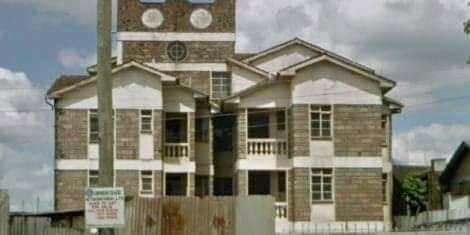 The three floored house is believed to be owned by a local businessman. Some locals gained courage and tried to get into the house to establish for themselves the widespread rumours about ghosts.

A local identified as Patrick Juma, tried to gain access to the house an year ago with his @. After viewing the compound they decided to go inside the house and this is where hell broke.

After they opened the cabinets, they were attacked by cooking sticks and spoons and there was nowhere to run to. They noticed the gate had locked itself and they had nowhere to flee for safety. When they tried to open the gate, they were slapped hard until they gave up and the beating stopped. This was the last time they set their feet on that compound.

A resident who was born and raised in the area, claimed that on the roof top, there was a swimming pool with flowing water which has never been used by anyone.

A man identified as Kinyua narrated the story saying that he was working in that place as a sawjer and he had to quit after he saw some strange things at night. This has left many Kenyans in fear and with mixed reactions some saying they be given the house to be living there.

Content created and supplied by: Bettyshii (via Opera News )

Mutahi Ngunyi React to DP Ruto's Lose of Temper in Laikipia, Reveals how to Know his True Colours