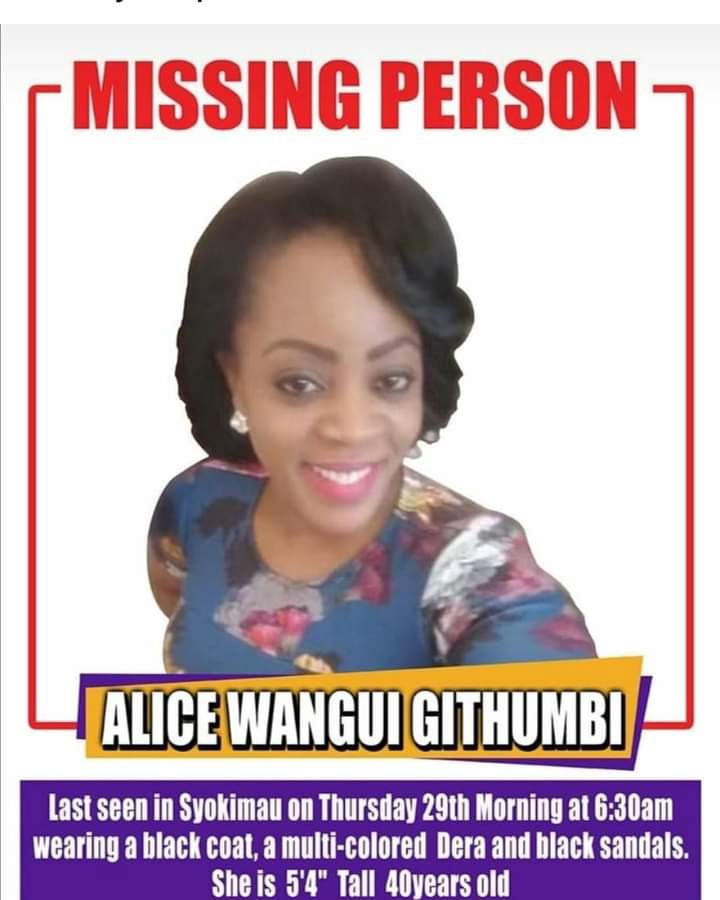 A poster about the missing woman(source.facebook)

A middle-aged woman identified as Alice Wangui went missing from her Syokimau home on the 29th of October 2020.

Her family and more so her husband has been up and down trying to trace her whereabouts.

According to the husband, the woman left home on the 29th for work never to be seen again leaving her family devastated.

Furthermore, her phone has been off since then thus making it hard for them to contact her.

"She left to town. But since she walked outside the gate, her phone has been off and we have not been able to contact her," Wangui's husband said.

They were forced to engage the police in the search after their efforts were failing.

However, they can now heave a sigh of relief after efforts to trace her ended at Katoloni prayer center in Machakos, according to the Directorate of criminal investigations.

In a Twitter post, the DCI stated that the missing woman had been at the center for the seven days she has been missing.

According to records she checked in on the 29th and has been there all along.

"Alice Wangui Githumbi has been traced to KAG Katoloni Prayer Centre, Machakos. It has been established that she checked in at the said center on October 29th, 2020," read the post.

It's however not clear why she chose not to notify her family of her whereabouts.

Cases of people disappearing have been rife in the country. However, the DCI has been helping in tracing those missing.