By PatienceC (self media writer) | 1 year ago 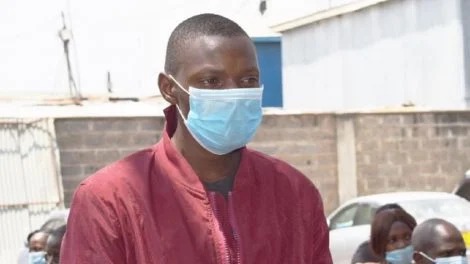 A National Youth Service Officer is being held by the Anti-terrorism on suspicion that he has been engaging in terror activities.

APTU officers, working on a tip off nabbed Samson Muriuki Kung’u on Sunday at the National Youth Service Camp in Nanyuki after he was linked with terror activities, the officers were trailing his movements before finally making arrest.

According to Nairobi News, after the arrest, he was found with a white substance, wires that looked like a circuit breaker, a substance suspected to be used in making explosives and other suspicious things linked with the making of explosives.

Henry Okello, an ATPU detective obtained a court order at the Kibera Law Court to detain the suspect until Friday to conclude investigations into the matter that has raised panic at the Nanyuki NYS camp.

His two phone numbers have been submitted to the service providers so that his calls, subscriber details, registration data and all other important information can be obtained and used in the investigations. This three other phones have been handed to the cybercrime unit.

Should he be found guilty, he is likely to be presented before court where he could face up to a ten-year jail term.

The ATPU, that was formed to fight terrorism in the country is always on high alert to thwart any form of terrorism activity within the borders of Kenya. The nabbing of an NYS officer shows how prepared they are and their thoroughness in the fight against the vice that has caused pain in the country on several occasions.