By WanjikuKinyanjui (self media writer) | 1 year ago

Since the onset of the Coronavirus pandemic in Kenya, many people have died, not only from the disease, but also as a result of the safety measures put in place to curb its spread.

Apart from brutal killings by police officers while enforcing curfew regulations, other lives have been lost just because of face masks.

Today, residents of Chokaa area in Kangundo road, Nairobi held protests after one of them was knocked down by a Matatu. 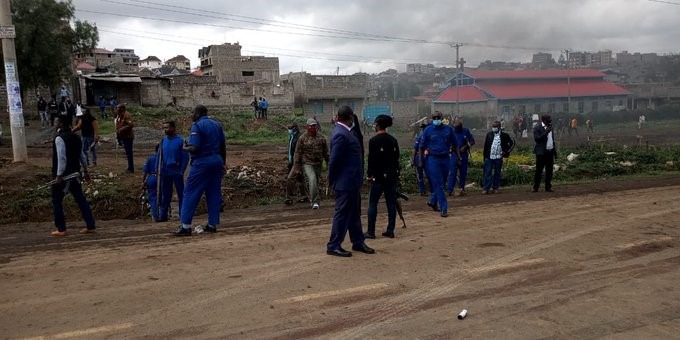 Police officers having an encounter with residents at Kangundo Road; Photo Courtesy

According to eye witnesses, the man was being chased by police officers for having committed an offence of not wearing a face mask.

A report by NTV’s Dan Mwangi indicates that the man allegedly failed to give a Ksh 200 bribe that the cops demanded from him, prompting him to run away.

It is during this encounter that the man met his death after being knocked down by an oncoming Matatu.

This incident comes just a week after a man was tortured to death at Mbururu police post in Kakamega after being arrested over a face mask.

Investigations by Homicide Detectives narrowed down on 7 police suspects after an autopsy revealed that the man died out of repeated trauma from a blunt object.

In June this year, 3 men were killed in Nandi amid a clash with police officers for failure to put on face masks.

Content created and supplied by: WanjikuKinyanjui (via Opera News )