By muchirimachua (self media writer) | 1 year ago 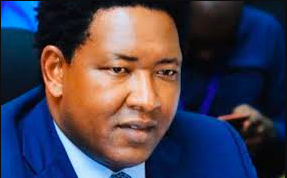 Earlier today, Narok Senator Ledema Ole Kina was charged with ethnic contempt which he denied before Magistrate Martha Mutuku who dismissed the senator’s application to end his case. Ms. Mutuku said Ledama’s application to end his case laced merit and was dismissed. She said that the Director of Public Prosecutions will issue the Senator with the evidence supporting his allegations and he will be allowed to challenge it after cross-examination. Defense lawyers Omwanza Ombati and Prof. George Wajackoya objected in court claiming that Ledama’s case lacked merit but the Chief Magistrate disallowed their objection. Ms. Mutuku mentioned that the senator’s case can be heard by an alternative dispute resolution before the final trial. After dismissing the objection raised by his lawyers, Ms. Mutuku asked Ole Kina to answer his charges as drafted by Director of Public Prosecutions. The senator denied uttering words in a live TV show which were intended to incite feelings of discrimination against non-maasai communities living in Narok county. The charges against Senator Ole Kina states, “On February 19,2020 at Jeff Koinage Live on Citizen news TV Channel, in Nairobi within Nairobi County, uttered words to the effect that Maasai issues will be articulated by Maasais! Not manje….it continued.” According to the prosecution the charges are contrary to National Cohesion and Intergration Act No. 12 of 2008. Ms. Mutuku released the Narok Senator on a cash bail of KSh. 100,000 or KSh. 200,000 bond until June 30th when the case will be mentioned. The magistrate directed Mr. Ledema no to post about his case in public while it’s still pending in court. His lawyer Mr. Ombati confirmed to the court that the senator won’t deviate from court orders.

Content created and supplied by: muchirimachua (via Opera News )

Cate Waruguru Breaks Silence After Being Kicked Out By President Uhuru, Reveals Why She Is Proud

Why Musalia Might Declare His Support For Odinga Ahead of The 2022 Polls. (Opinion)