How To Become A Pilot In Kenya: Requirements, School, Fees And Salary

By Expertwritter (self media writer) | 23 days ago 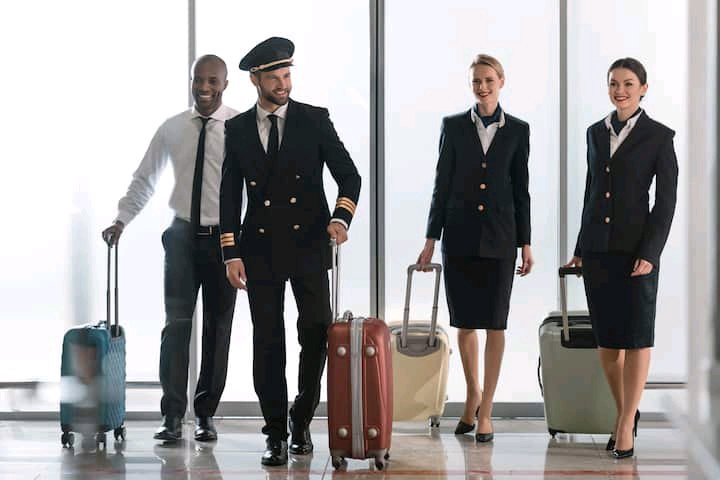 Almost every youngster's ultimate goal in life is to someday fly airplanes as a profession. Despite the strong demand for captains, only a small percentage of would-be candidates actually make it into the field. Finding a job as a pilot is difficult, which is reassuring because it suggests that employment is secure for those who choose this career path. On the other hand, many Kenyans may give up on their desire because so little is known about how to enter the piloting profession.

To become a pilot in Kenya takes not only a lot of enthusiasm, but also a long list of prerequisites and certifications. To start, you need to make sure that your academic credentials are acceptable at the flying school of your choice.

Many requirements must be met during the piloting training before a student is given permission to fly airplanes. Preparing oneself financially, physically, and emotionally before enrolling in aviation school is essential if you want to become a pilot.

What It Takes to Become a Pilot in Kenya

There are two routes to becoming a pilot in Kenya: the military and aviation schools.

There are three paths to becoming a pilot in Kenya or anywhere else in the globe. One option is to enlist in the armed forces as a cadet officer and eventually complete flight training. There are no costs involved because the military will cover them all. 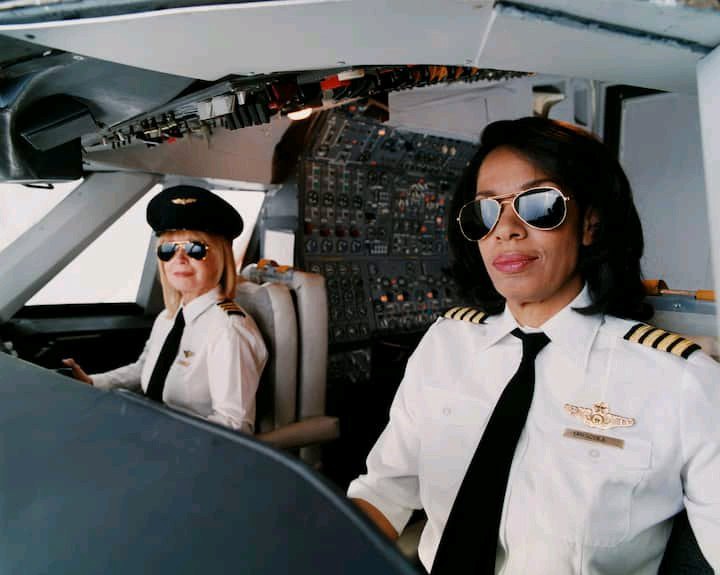 Training in Aviation and Necessary Programs

What do you need to know to get into a flight academy? To become a pilot, you need at least a C average in KCSE (or its equivalent) subjects, including English, Mathematics, and Physics/Chemistry/Physical Science. Furthermore, most Kenyan pilot schools necessitate a KCSE mean grade of C+ or an equivalent with at least a grade C+ in English, Mathematics, Geography, and any other science.

To become a captain in a commercial airline, you need a perfect score on the Aeroplane Performance Rating exam. Other necessities would be: 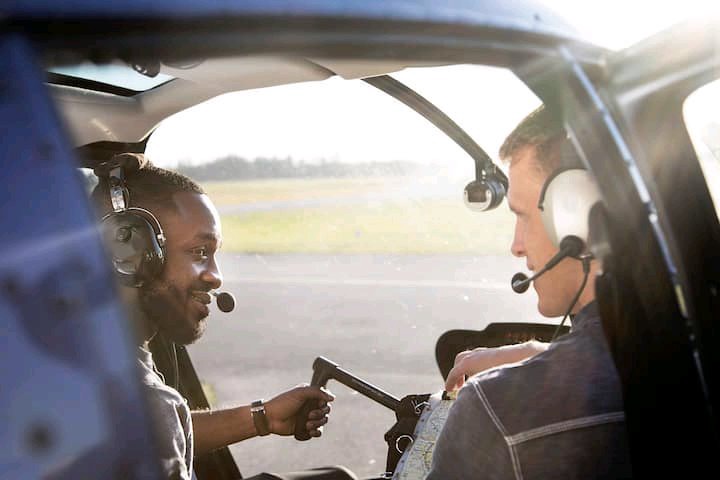 To participate, you must be 16 years old or older.

A medical clearance issued by a certified aviation physician.

All relevant academic papers and copies of your national identification card/passport/birth certificate.

You'll need to ace our English, Math, and Psychometric tests in order to move further in the hiring process.

Many different types of pilot training are available, such as:

The Private Pilot's License (Helicopter) is equivalent to the PPL but is issued for the operation of privately owned helicopters.

Learning to Fly With Instruments: Instruction in the use of aviation instruments

Instruction in the operation of aircraft with more than one engine is provided by a course leading to a "Multi-engine Rating."

Kenya has a number of excellent aviation academies.

Where can I enroll in a Kenyan aviation school? There are roughly 15 aviation schools in the country that are recognized by the FAA and offer training for pilots, air traffic controllers, aircraft maintenance engineers, and flight operations personnel. The Kenya Civil Aviation Authority must have approved the school you attend (KCAA). The following are examples of Kenyan flight schools:

Training Programs for Pilots at Wilson Airport in Nairobi.

Outside options include common destinations like the United States and South Africa, where training can take anything from six months to a year and costs far less than in Kenya. The negative of going abroad to school is that getting a pilot's license in your own country will cost you close to a million shillings.

In either situation, you'll need millions of dollars to cover the costs associated with the legal process. This is an example of a Kenyan flying school's pricing structure for pilot training:

Commercial pilot license costs are broken down as follows:

If you want to become a pilot in Kenya, you'll need at least Ksh. 5 million. There may be a little but noticeable difference in cost from one institution to another.

Academic prowess is not the essential need for becoming a pilot. When applying to aviation school, you'll need to meet a number of criteria, some of which may be exclusive to that school. Aviation programs typically examine the following areas:

If you have no desire to fly, you will not be a good a. To get into aviation school, you need to show that you have a genuine interest in flying, uninfluenced by media or other people.

Before a student is accepted into the school, they must undergo a rigorous aptitude test that involves being taken up in the air for roughly five sessions to assess their potential and abilities.

To be a pilot, you need to be highly concentrated, so you should avoid distractions like cigarettes, miraa, and any other drugs. Aviation schools do not encourage taking the Kenyan matatu mentality or short cuts.

While a C+ is technically acceptable, most aviation programs would like students to have a B+ or higher on the KCSE.

Good health is not up for argument in the aviation industry. In order to join the flying profession, you need to show that you are in good mental and physical condition. To enroll in any aviation school in the country, you will need to pass a series of medical and drug tests.

What is a pilot's average salary in Kenya? Whether or whether this applies to you depends on whether you fly for fun or for a living. How much a private pilot makes depends on their ability to bargain with clients and how much they are willing to pay per flying hour. However, commercial pilots receive compensation based on their level of experience and seniority. 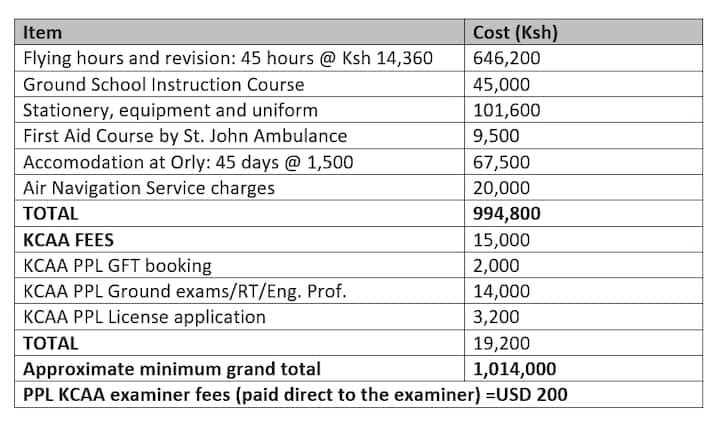 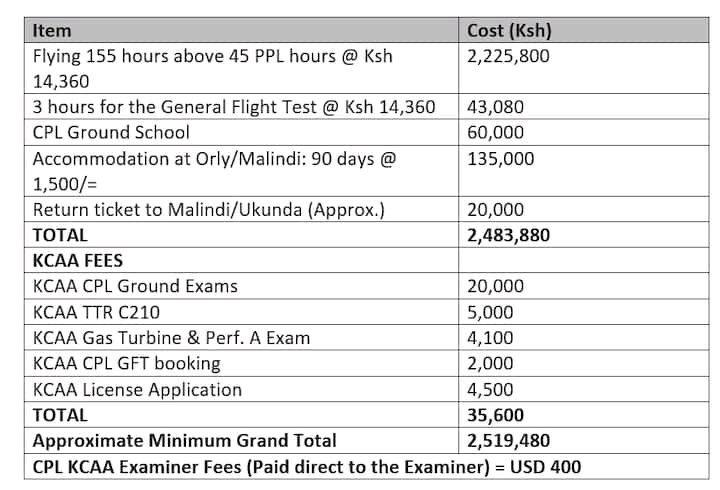 It's a hotly debated topic whether or not foreign pilots should be paid more than their Kenyan counterparts. The average pilot with international experience earns Ksh 716,802 per year. Boeing pilots in Kenya make Ksh. 483,000 per year. Most pilots make around Ksh. 132,000 per month, with the highest earners bringing in around Ksh.

Instructions for Obtaining a Pilot's License

Obtaining a commercial pilot's license is as simple as filling out an application and sending it in.

The applications can be obtained from any branch office of the Kenya Civil Aviation Authority or downloaded from the KCAA website.

The completed form should be sent in person to the KCAA headquarters or mailed to Director-General, Kenya Civil Aviation Authority, P.O. Box 30163-00100, Nairobi, Kenya.

Form for demonstrating relevant aviation experience, including a breakdown of required flight time.

Condensed version of the flight logbook

A request for certification of English language proficiency

A request for a license to operate a radiotelephone in flight.

Submit your application for a license only after you have paid the required money and submitted a receipt showing that you have done so.

Within seven days, the KCAA will contact you to come pick up your commercial pilot license.

I was wondering if it was difficult to become a pilot in Kenya. To the contrary. The right education will enable you to pursue your dream. It's exactly how you pictured it, so just do it. Everything you need to know to get started on your path to becoming a pilot in Kenya is right there.

Tuko.co.ke featured articles about international airlines that pay their pilots exceptionally well. Pilots in Kenya can expect to earn anywhere between Ksh.132,000 and Ksh.420,000 each month. If you compare it to the typical salary for executives in the country, you'll see that it's quite a bit higher.

On the other hand, the starting salary for a captain at some airlines can reach $549,882. (about Ksh. 60 million). If you want to know which companies compensate their pilots well, read the article.

Content created and supplied by: Expertwritter (via Opera News )