A City Hall employee has turned down an offer to be part of the team that will lead Deputy President William Ruto's Presidential campaign team.

Nairobi Health Chief Officer, Mohammed Sahal, had been picked to replace Ruth Ondicho as the Deputy Security General in charge of operations for the United Democratic Alliance (UDA) party.

He, however, declined to take up the plum post, noting that the job would create conflict of interest as he is a serving public officer.

“Thank you for offering me the position. Unfortunately, I have decided to turn it down as it isn’t the right fit for me because I am a public officer."

"Kindly communicate the same to the Registrar of Political Parties. I wish you all the best in finding someone suitable for the position,” Sahal stated.

The City Hall official currently oversees four departments at Nairobi City County Government. He has been at the helm since May 2018 when he was appointed by former Nairobi Governor, Mike Sonko.

Among those appointed in Ruto's Presidential campaign team include Seth Panyako who is the deputy chairperson for Programmes and Nicholas Marete, the deputy chair in charge of Strategy.

Edward Muriu took over from Melisa Ngania as UDA Secretary for Legal Affairs and the position of deputy national organising secretary in charge of Strategy went to Charles Wanjala.

Ruto's UDA has, in the recent past, been on a charm offensive in a bid to woo the voters through his bottom-up economic model - a narrative perceived by the DP as the cure to the country's economic crisis. 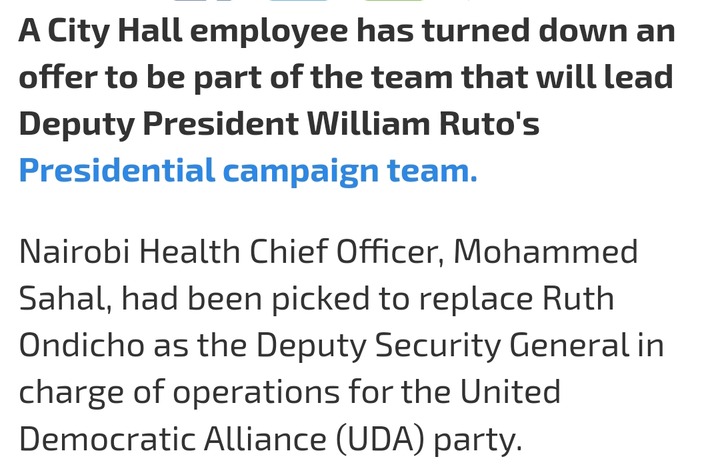