By Jackwriter (self meida writer) | 12 days 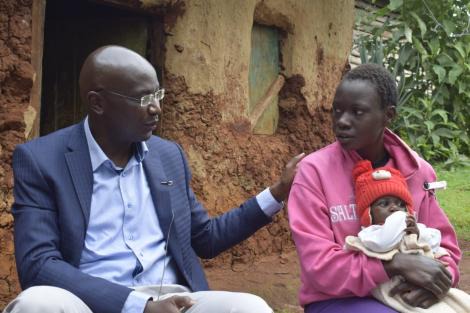 The 17-year-old identified as Yvonne Barasa has been sharing a one-roomed rented mud wall house in Kamusinga, Bungoma with her 5-month old child, Harriet Barasa, the twin sister in Form 2 at Kibingei Secondary School as well as her grandmother.

The family had not paid rent for a couple of months, a factor that made them face several evictions in the past.

Further, Yvonne's child needed colostomy- a surgical procedure that involves the opening of the colon.

Touched by their state, the governor cleared their rent arrears for four months. He also moved the family to a new home where they would temporarily stay for six months before the completion of their new home.

Yvonne, who had attained 370 marks in the recent KCPE exams, received a full scholarship from Wangamati that would enable her to join Kolanya Girls to begin her high school education.

The county boss also aided Yvonne's sister to enrol in Kibingei Friends school, a boarding school. Initially, Harriet would embark on a daily 2.5-hour trek to and fro school.

Wangamati also gave Yvonne's grandmother Ksh10,000 for daily upkeep. Moreover, he booked an appointment with Moi Teaching and Referral Hospital in Bungoma for the candidate's sick child who would undergo the surgery in stages.

The news comes as Kabuchai MP Joseph Majimbo recently constructed a new house for an 87-year-old whose predicament went viral after reports showed that she trekked three kilometers from her home to the nearest polling station in order to vote in the recently held by-elections in the area.

"Her aim is to vote for a leader who would cater for her welfare. Today the area MP honoured Namunyemba's wish.

"He built her this new house, painted and furnished it," Namunyemba's kin informed journalists.

Majimbo alluded to the project stating that he was amazed by her resilience.

"Our mother (Namunyemba) is a leading example for many. I love her spirit and vision. If such an aged woman can wake up to vote, what about us - the youth - who register but fail to vote and later complain?" the MP posed.