By CarolyneciousNewsHub (self meida writer) | 25 days

How will you end the bad blood between teachers’ union and TSC? 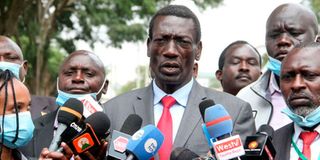 Newly elected Kenya National Union of Teachers Secretary General Collins Oyuu talks to journalists at the Ruaraka Sports Club after the conclusion of Knut elections that were conducted on June 26.

The Salaries and Remuneration Commission froze pay rise for all civil servants including teachers for the next two years. Yet you have said that you won’t accept any CBA without monetary aspects from the TSC. Is there any assurance that salary increment is still on? Nathan Muthamia, Tharaka Nithi.

We must begin by understanding the fact that there are several types of CBAs categorised into two: Monetary CBA which focuses on financial gains of workers and non-monetary that addresses the welfare of the members. In most cases, the aspects go hand-in-hand when negotiating.

The role of trade unions is to research on the value of the currency vis a vis the earnings and place demands to employers based on the findings. What we did as Kenya National Union of Teachers (Knut) was to place a demand to the employer, who then gave a proposed offer which we are still discussing. Inflation, which is the general increase in commodity prices and the fall of the purchasing power, may not allow us to accept the position SRC took of freezing salary increments.

But then we are still negotiating. Our members should be patient to allow us engage appropriately. We shall have something credible to present to them amid the hard economic times.

There is a perception that your election as the secretary-general had approval of some senior people in government. Was that the case? Joseph B. Ashioya, Kitale.

It may be difficult to respond to perceptions, but let me put it this way. When elections were declared, all positions remained vacant; including that of the secretary-general. Knut respects the rule of law and is governed by leaders who are democratically elected in all the 110 branches. Teachers exercised their constitutional rights and privileges to elect new leaders.

Knut is currently on its knees after thousands of members left. In your view, who should take the blame for the situation? Beatrice Atsieno, Mbale

It’s true the union is currently on its knees. Operations in almost all the branches were halted due to lack of finances. This is one of the reasons teachers wanted change of leadership. We have started by addressing our internal challenges making structural administrative adjustments. We already have paid courtesy calls to stakeholders in the sector and we have several programmes lined up for us which we believe will inject a new lease of life in the organisation.

How will you change Knut for the better? Komen Moris, Eldoret

I’m going to encourage team work; I will ensure that structures of leadership are involved in decision-making. I shall lead my team to dialoging with other stakeholders as we focus on getting common understanding on issues.

What brought down Knut was the ‘I’ syndrome, where one always thought he knew it all. Some decisions which impacted on the entire institution were made by an individual without any caution and then we had to take collective responsibility. My dream is to substitute the ‘I’ with the ‘we’, which is the language of trade unions.

Recently, your employer made proposals on teacher training in our universities which have rattled many stakeholders in the sector. What is your take on the issue? Komen Moris, Eldoret.

We need to understand who of the line stakeholders plays which role between the Ministry of Education and the TSC. We however have already raised our concern over the matter. Teacher training is under the Ministry of Education. With the new curriculum, which will need teachers to be in-serviced to understand the expected pedagogy; we will work together with both the ministry and TSC to get the best thing done. 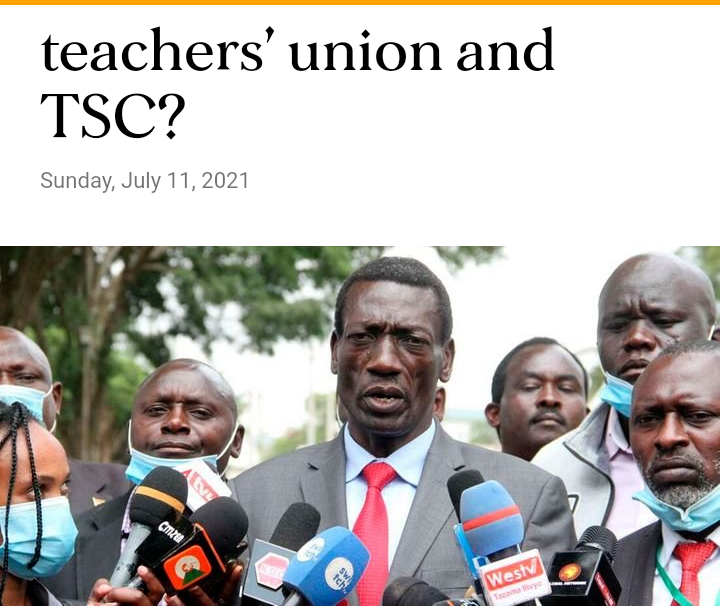 Very Painful After A Former Minister Dies and His Wife Follows Him, Some Few Hours Later in Tanzania