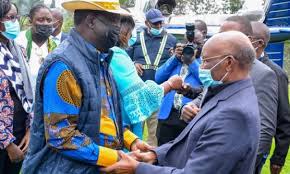 The area residents have won big after Baba Raila's friend Samuel Kamau Macharia promised to set up a radio station speaking in Borana language in the next three weeks. There is no Borana speaking radio station currently and this have served the locals a great deal since they will have access to local, national and international news in their language, anothor major win is that only people from Borana will be employed in the radio station thus more than 100 better jobs have will be created.

Today's Two Matches to Bank on