Class 3 Dropout Assembles His Own Ksh200K Car From Motorbike Parts

By MeghanNimmoh (self meida writer) | 1 months 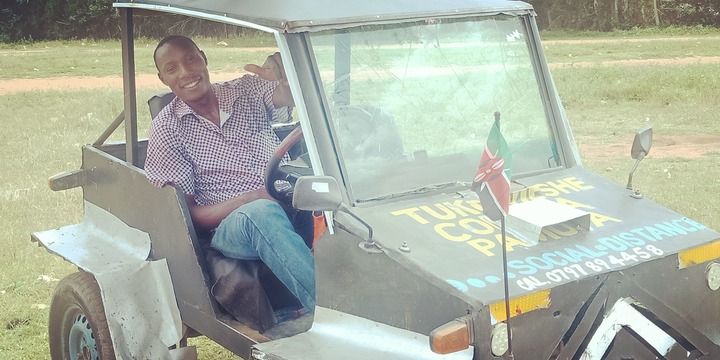 A class 3 drop out in Athi River has invented a car from dismantling his motorcycle and fixing a four wheel car on his own.

Born in Mosocho Kisii County, Kennedy Saota had a dream of owning a car since he was 8 years old. His father sold radio cassettes for a living, while his mother was unemployed but his dream was un-wavered.

Speaking to KNA, Saota said his father died when he was 8 years old and that was the end of his education because his mother could not cater for all their bills even though he wanted to be an engineer and fix cars and airplanes.

“I only studied up to class three since my mother could not afford to educate me further. I have always wanted to own a car and fix them too. I knew one day I must own a car so when I came to Nairobi 3 years ago, I saw there were so many and I ended up living in Athi River where I started working as a Boda boda rider” said Saota.

Saota says he got employed as a boda boda rider but still had a dream of becoming an engineer. He also worked at Delight Company selling Solar Panels, and when Corona hit early in 2020 he lost his job. He added that since he had saved some money from selling solar panels, but childhood dream was still haunting him, that's when he decided to buy his own motorcycle for ferrying passengers within Athi River and Mlolongo towns.

“I was selling Solar Panels and was paid on commission, when Corona hit I was rendered jobless and even carrying passengers was difficult because everyone was home, keeping safe from the pandemic,” said Saota.

The 29 year old said he started going to the scrap yard to buy iron sheets that would help in making a car from the dismantled motorcycle and would buy a 1 Kg of medium iron sheets at 500 from the little savings he had.

He noted that the car carries 3 passengers and their luggage, he carries farm produce for farmers in the villages and also carries stuff for shop owners in Athi River and Mlolongo. He added that he once carried passengers to Thika and back but got into a lot of trouble because he does not have a valid driver’s license and insurance.

He notes that it has been a cat and mouse chase with the police because he does not have insurance nor a valid driving license and so is not permitted to be driving the car or carrying passengers on the main road, yet he cannot afford to pay insurance because business has been down since last year. 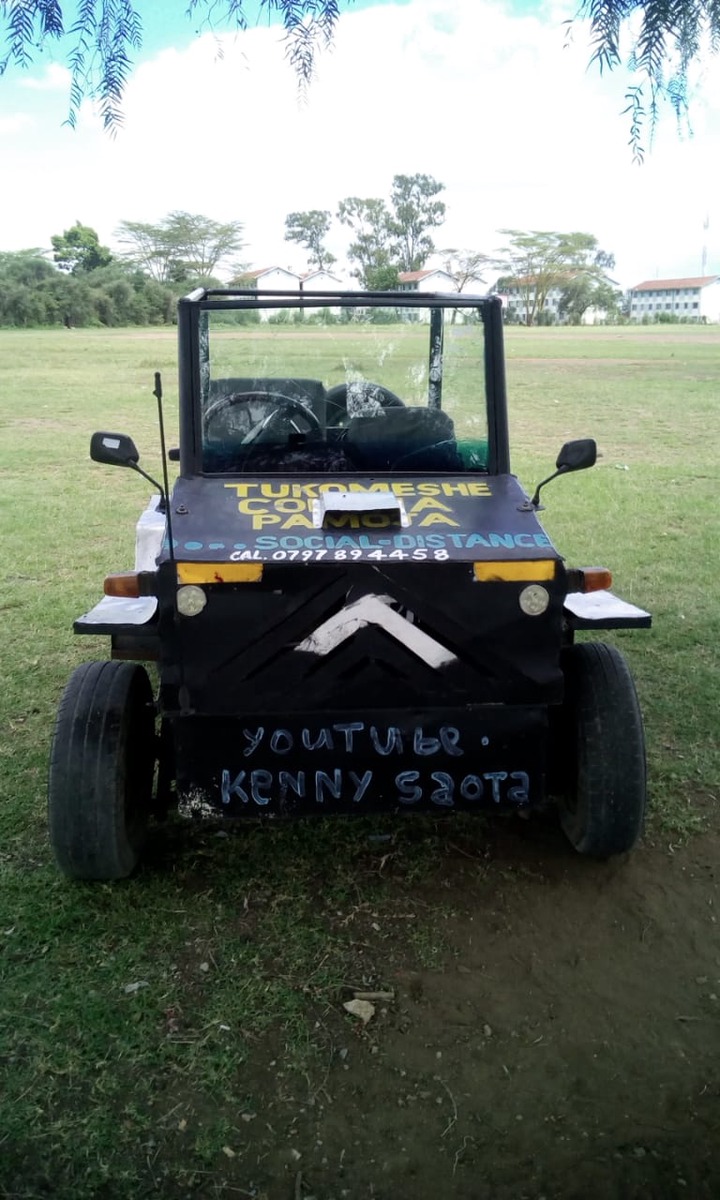 He says the innovation has brought him a lot of praise and attention from leaders and the local residents and even some youths are interested to learn from him.

Saota explains that he can repair a car and a motorcycle with ease since that is his passion which has gotten him trust from the residents in Athi River.

After friends saw him driving his car, they all wanted him to make theirs too and so he got two more orders to make 2 cars from dilapidated motorcycles.

He further adds that the car has 4 wheels of size 13, it shelters one from the rain and is very stable on the road such that it can never cause accidents unlike the normal 2 wheel motorcycle.

He says it cost him around Sh200,000 to complete his car though some parts like the windshield even though it is cracked, he got it from a car that was written off and no longer road worthy.

Saota believes he can do more and would want to be an Engineer in future, own his own garage and innovate more cars which he will modify and bring them up to standards if would get any help from well-wishers.

Why some girls are clingy in a relationship

5 Phone Solutions To Stop Your Phone From Hanging

Interesting Facts About The Luo People