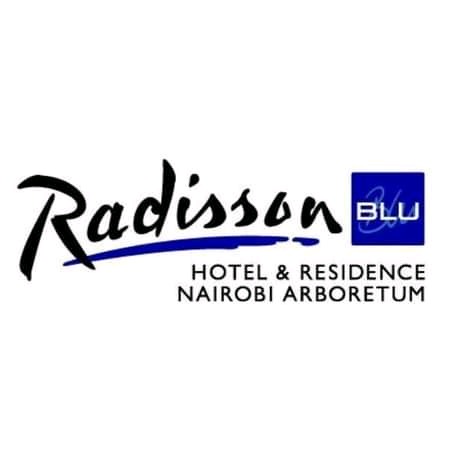 Every organization has its set of policies that enable it achieve the set targets in relation to its vision. Some of the rules and regulations may be friendly or non-friendly to a section of employees and clients.

Radisson Blu Hotel and Residence, Nairobi Arboretum, situated meters away from the State House, has officially introduced a policy that bars its employees from gaining entry into the premise with their personal mobile phones. The full implementation of the policy started on the morning of Thursday, 21st October 2021.

In an earlier statement issued by the internal security department, workers will leave their personal gadgets at the security entrance before proceeding to their work stations and pick them on their way out of duty.

“It is the policy of Radisson Blu Hotel and Residence, Arboretum that all employees (that will also include casuals and outsourced employees deployed to the Hotel) carrying a personal mobile phone to their respective work station and usage whilst on duty is strictly prohibited.” The policy statement reads in part.

It continues to say, “Employees should not gain access into the Hotel premises carrying their personal phones and tablets.”

However, the policy exempts the facility's General Manager and Heads of Departments. There are other employees exempted from the restriction because of some reasons.

Security officers stationed at the hotel entrance will be required to ensure that employees entering the hospitality facility register their gadgets and deposit them in an unoccupied locker. The individual will then proceed to the hotel with the locker key under their custody and will only unlock and take their phones during the time of exit from duty.

Former employees who visit the hotel will also not be allowed in with their gadgets. They will be required to register at the security entrance where their devices will be kept until the time of leaving.

The restriction further state that, “Any employee with a request to use their personal mobile phones while on duty will be directed to the internal security.” 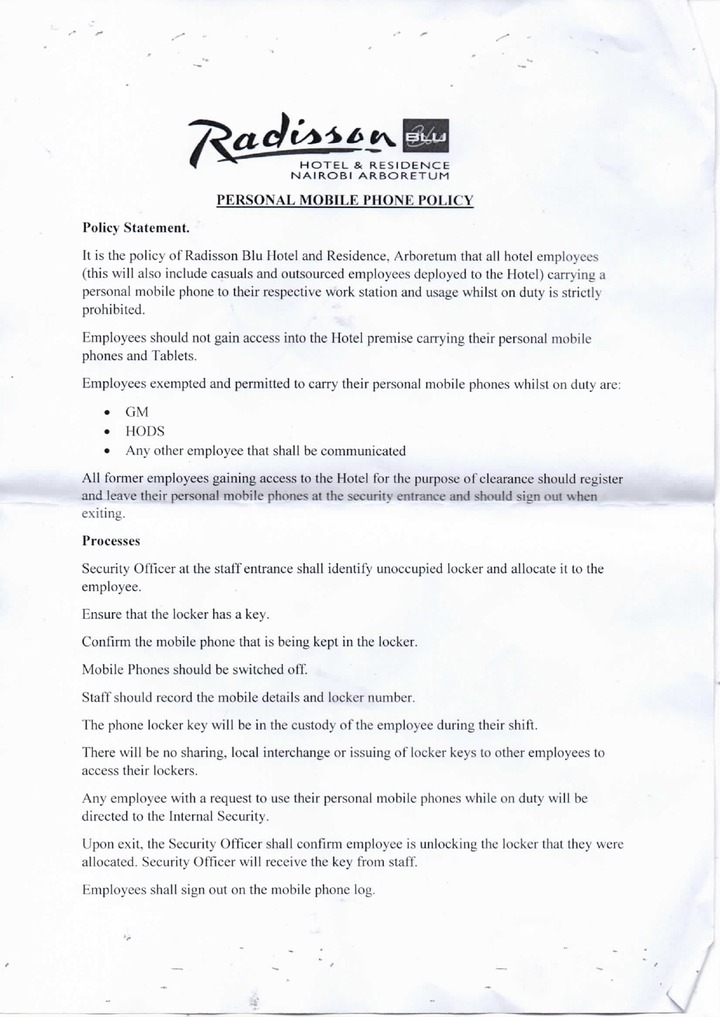 The policy comes with a harsh penalty for those who loses the phone locker key. One will part way with 1,000 shillings as replacement fee.

It is not clear why the policy was introduced by the five star but the change could be related to production, safety and security of the hotel.

A number of employees were shocked upon being asked to switch off their phones and deposit at the security area. It took the intervention of the internal security department to have some of their cases heard and amicable solutions reached at.

Some complained of having demanding issues that would not allow them stay for the eight hours on shift without communicating to their families and friends.

“Telling them that I leave my mobile phone is like telling me to wear one shoe.”one of those who disputed the policy said.

To some, it was nothing new as they had worked at some organizations with similar policy.

“Personally I have no problem with the policy. After all, I rarely use my phone why at work.” one employee said.

An interrogation into the matter reveals that the employees were requested to sign the policy forms before Thursday where some complied but others are yet to.

A section of those who are yet to sign had the opinion that they feel insecure staying without the phones.

“Hizo vitu tulipewa na wengine tumeziweka tu kwa locker. Kukosa simu ni hatari kwa usalama wetu,” translated, “We were given those things (policy forms) but some of us have kept them in lockers. Being without phone is a risk to our safety.”

The implementation of the policy to other employees comes 3 months after the security officers contracted to man the premise were prohibited from using their phones while on shift.

In this information age, it is a common scenario to see nearly everyone carrying a personal mobile phone, tablet or computer laptop on their way to work or using the same at their various destinations. Separating one from his or her electronic gadget is undoubtedly one of the difficult policies an organization would employ.

Radisson Blu Hotel and Residence, Arboretum is a five star hotel within Nairobi. Radisson has other outlets in the city and abroad.

What are your thoughts on this policy that prohibit use of personal mobile phones at workplaces? Is it too harsh to the staff of the hotel?