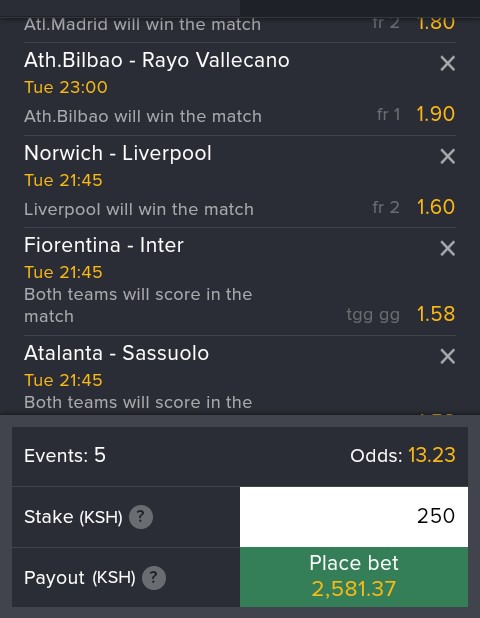 Getafe have lost all of their matches this season.

Getafe is last in La Liga.etafe has only scored 1 goal after 5 days.

Atlético Madrid have not yet lost at the start of the season, La Liga and Champions League included.

Athletic Bilbao have been undefeated for 7 games in all competitions.

Bilbao has not lost since 5 duels against Vallecano, 4 wins and 1 draw.

Bilbao are on an ongoing streak of 4 wins at San Mamés against Vallecano.

Bilbao is 2 points ahead of Vallecano in the standings.

The Nerazzurri have just humiliated Bologna (6-1) on the last day.

The Lombard club is still undefeated in Calcio.

The Interists have scored 15 times in 4 days, an average of 3.75 goals per game.

Fio lost only 1 meeting, in Rome (3-1), in the Italian championship.

Atalanta Bergamo come out with 2 good results away from home

Norwich City have lost 6 of their last 7 matches played.

Norwich is on an ongoing 3-game losing streak.

Norwich is the Premier League's red lantern with 0 points on the clock, or 5 defeats in as many days.

Norwich has the worst offense (2 goals) and defense (14 goals) in the Premier League.

Liverpool lead the Premier League with 13 points out of 15 at stake.