By GerryTips.com (self meida writer) | 13 days

Vålerenga will play in this fixture coming off the back of a 1-1 Eliteserien drawn game versus Strømsgodset IF.

Vålerenga have been on a persistent run of goalscoring form, finding the back of the net in each and every one of their last 6 games.

They have hit an aggregate of 10 during that period while seeing the number of goals scored against them stand at 8.

Lillestrøm SK will go into this match following on from a 2-1 Eliteserien win as they beat Mjøndalen in their last match.

The numbers tell their own story, and Lillestrøm SK have been scored against in 5 of their last 6 games, conceding 5 goals overall. Defensively, Kanarifuglene certainly have room for improvement. That pattern won’t necessarily be carried forward here, however.

Going into this one, Lillestrøm SK are undefeated in their previous 2 league matches away from home. 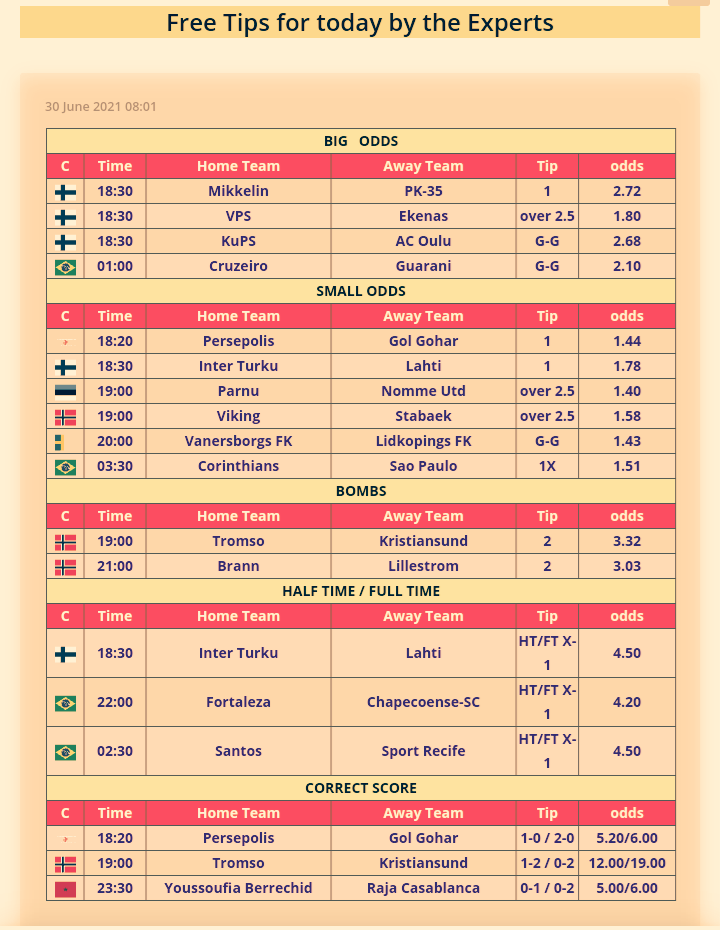 Molde FK will be hoping to bounce back here following a 1-0 Eliteserien defeat in their last game at the hands of Sarpsborg 08.

Their more recent scorelines really do illustrate the point that quality has been evident in the Molde FK defence. Molde have given the opposition little, resulting in the tally of goals that have flown into the back of their net during their last six outings standing at 4. We will find out if that trend can be continued on into this next match.

In their previous game, ODD Grenland drew 2-2 in the Eliteserien match with Rosenborg BK.

The stats don’t lie, and ODD Grenland have been scored against in 5 of their last 6 games, with opponents netting 7 goals in total. In defence, Oddrane have been far from perfect.

FC Haka will be looking for an improved result here following the 1-0 Veikkausliiga loss in their previous game against Ilves.

It’s been all too rare in recent times that FC Haka haven’t conceded. The facts show that Haka have been scored against in 6 of their previous 6 matches, leaking 8 goals on the way. That sort of trend might not be continued into this game, however.

Since tasting defeat last time out to Noah in Conference League Qualifiers action, KuPS will be aiming to make amends here.

A run of resolute showings from the KuPS defensive players has resulted in their ‘goals against’ tally amounting to 2 from their past 6 outings overall. During the same period, the number of goals that they have scored themselves amounts to 8.