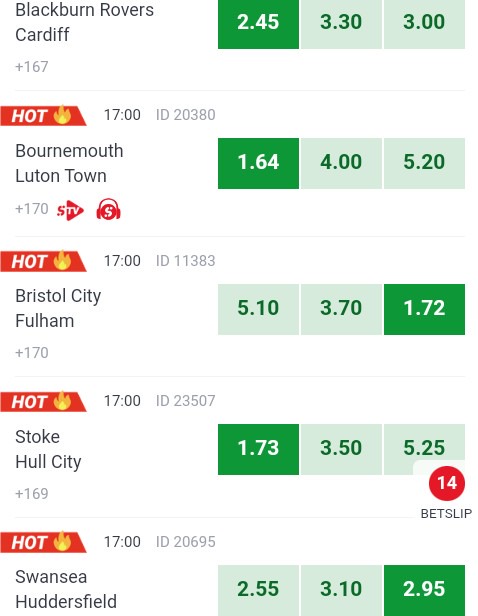 Both teams have scored in three of Fulham’s four away league games, which have produced 15 goals in total.

Both teams have also struck in three of Bristol City’s last four outings.

Fulham have lost two of their last three Championship starts, while the hosts are unbeaten in their last four (W2, D2).

Bournemouth are unbeaten from eight league fixtures this season.

Luton are winless in their last five games.

Bournemouth have recorded three wins to nil in the league this term.

These clubs have drawn six league games between them this season.

Both teams have scored in seven of Blackburn’s nine league contests.

Huddersfield Town have won two of their last three league starts on the road.

The Terriers beat Swansea in both league meetings last season.

Swansea have won just one of their eight Championship matches this term (D4, L3).

Hull City are without a win in their last seven Championship matches, losing five.

The visitors have also failed to score in six of their last seven league outings.

Preston are unbeaten in their last seven games in all competitions, winning four.

Birmingham have lost their last two Championship matches via a three goal margin.

The visitors have won four of the last five meetings including a 1-0 success at St Andrews in January.