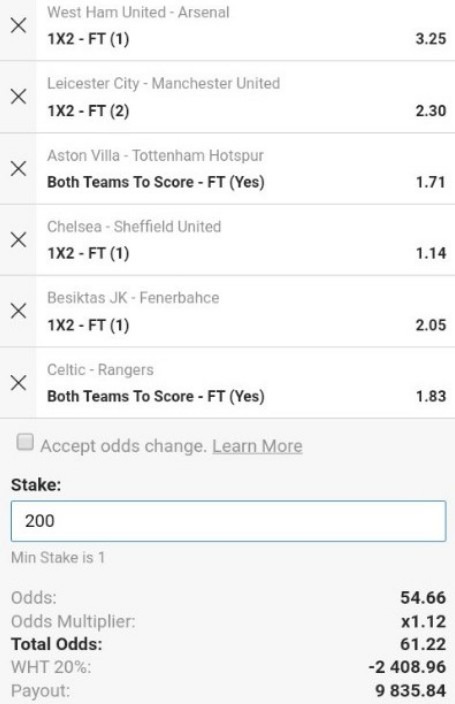 Chelsea are unbeaten in 14 matches.

Chelsea are unbeaten in their last eight home matches.

Sheffield United have five losses in the last six matches.

Rangers have 12 wins in the last 16 matches.

Celtic have 11 wins in their 16 home matches in the league this season.

West Ham United have one win in 19 matches against Arsenal.

Both sides are coming from defeats in their last matches.

Arsenal have won four of their last six matches.

Besiktas are unbeaten in their last nine matches.

Fenerbahce have 11 wins in their 14 away league matches.

Fenerbahce have failed to score in just one of their 14 away matches.

Besiktas have scored two or more goals in nine of the last 12 home league matches.

Four of Besiktas’ last five matches have produced over 2.5 goals.

Manchester United are unbeaten in 14 matches.

Manchester United are unbeaten in 13 away matches.

Leicester have five wins in the last 10 home matches.

Nine of Manchester United’s last 11 away matches have produced under 2.5 goals.

Leicester are unbeaten in their last three matches.

Tottenham Hotspur have four losses in five away league matches.

Aston Villa have five wins in the last 12 home matches.

Tottenham have three clean sheets in the last 10 league matches.

The EPL Match K24 TV Will Be Airing Live This Weekend

The Great Transformation Of The Rock From Playing Football, Wrestling To Acting In Hollywood