The following are today's both teams to score Predictions.

Hacken lost just one of the last six H2Hs within 90 minutes.

Hacken are the strongest away side in the division at this stage (W3, D2).

Clash of the titans

Just three points separate Hammarby from league leaders Hacken ahead of the round, which immediately leads us to believe that there could be some value in backing against the home side in some capacity.

The hosts have lost eight of their 10 games in the Swedish Allsvenskan.

Degerfors have failed to find the net in five of their last eight games, only doing so against the other three teams in the league’s bottom four.

AIK have won six of their last eight league games, drawing the other.

The visitors have won to nil six times in their 11 league outings.

Having finished 13th in the Swedish Allsvenskan last term, Degerfors look to be in much greater trouble this time around after losing eight of their first 10 games of the season.

Both Teams To Score Predictions. 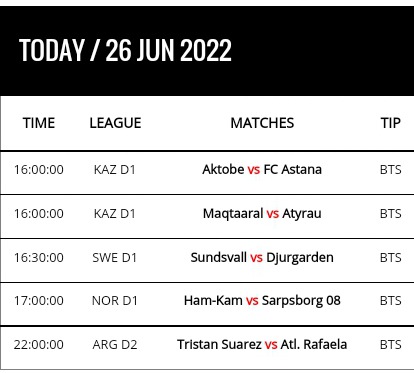 "You Let Us Down, When We Needed You Most" Mwalimu Dida Tells Lawyers After Raila's Defeat

Why The New Probox Is So Different