Bank on These Six (6) well analyzed Selections with boosted odds and Pocket a huge feedback.

By Frashascales (self media writer) | 3 months ago

Larne Will be hoping for another history after a 1-0 win over fierce Bala in conference standings qualifiers.

Agf Aarhus in their last fixture ended up with a draw against Brondby IF.

A disappointing run of 6 defeats in 8 trip's shows that Aarhus aren't good on road travels.

Larnes' outfit have been cooking with some gas of late which has seen them net 21 times to secure 19 points out of the possible 21.

We therefore see the host's applying pressure on rival's to get the 3 points out.

The visitors are really in their inaugural moments which has recently made their performance quite impressive.

This will be the first ever encounter between the Norwegian and the Swiss team and also the 1st leg of their preliminary round battle.

However,the tough servette are determined to in whatsoever case during and after the whistle tally on the score board.

I have to cover this end results with a draw no bat on servette in order to minimize the possible risk that may occur to you.

The Europa conference league qualifiers manouvers as the Belgian sides tie head's with the Norwegian counter parts in the 3rd round matches.

While we expect goals from both ends, this fixture won't be easy at all.

Valerenga have had a great run in the last 10 games and scoring in all despite Losing 2 affairs.

On the flip side,a home advantage for Gent who In 10 clashes have lost 2 and also failed to claim a Goal.

A tense encounter between these two clubs that posses a similar image and good goal scoring record.

Fairly, it's worth sharing the points. 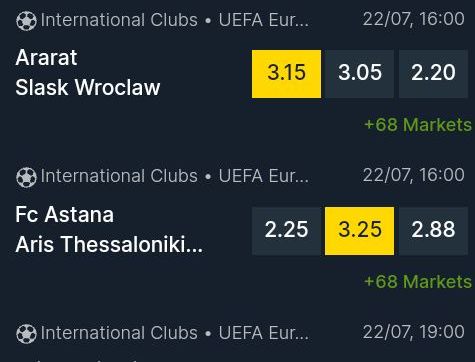 Dallas are without a win in their last three tournaments after suffering a 1-0 to loss to Portland Timbers.

The Rapids will try to stretch their undefeated run of 3 when they host Dallas who Drew in the previous weekend.

Dallas are always vulnerable to concede and their old habits of attacking have been predictable.

The Rapids have rarely had an off-game which has made it easy for them to find ways and score.

We back on Colorado to win.

The Home's have managed to Win Three of the 10 matches while Hacken getting only 6 victories out of 15 which is a startling return given the level of opposition they face in Sweden.

Aberdeen are currently not in better shape but this being a tough and determining knot,they shall apply necessary efforts to minimize shots from the opponents.

Hackens history in road trips is not as good as at home.

The two lineups Head to this anticipated encounter buoyed by their previous equal winning responses.

The last results proving appetite for an eventful day, goals scoring is going to be witnessed from either hand.

We are in ultimate decision that although the favour might land on PUSKAS,also both teams will score.

Prediction ; Away win and Btts.

Thanks for reading my article,Please like and leave positive comments.

Content created and supplied by: Frashascales (via Opera News )

How to identify a good location for your business.