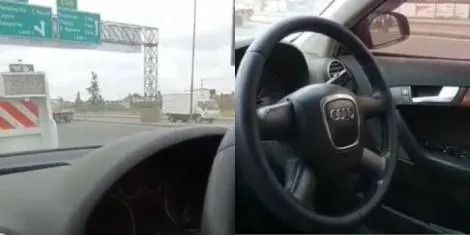 A video of a purported self-driving Audi along Thika Road has elicited mixed reactions from the public about its innovative features and design.

The vehicle in question ignited a debate on Wednesday, June 22, on whether self-driving cars can survive on Kenya's chaotic roads, characterized by bad driving habits.

The video showed the driver seated in the passenger's seat while filming the car cruising along Thika Road.

Upon deeper scrutiny of the video it was established that the vehicle was on a truck's flatbed. A few Kenyans online were quick to point out the ruse pulled by the driver after the majority of users were hoodwinked.

We also confirmed that self-driving cars are yet to be allowed into the country due to the lack of a regulatory framework and other challenges.

The concept of autonomous cars dates back to the 1930s when General Motors created the first self-driving car model, controlled by electromagnetic fields.

The model later turned into reality in 1958 when sensors were fitted to the vehicle and hence the steering wheel could be manipulated to either the left or right direction.

Years later, leading companies such as Ford, Mercedes Benz, Tesla and BMW have thrown their hat into the technology in order to fully exploit and develop the concept.

In 2021, Tesla came close to hitting the bull's eye with their full self-driving package. This enabled a semi-autonomous model which offered hands-free control along highways.

The technology is yet to be fully adopted across the world. In the United States, the National Highway Traffic Safety Administration revealed that over 400 accidents in the past ten months involved vehicles with advanced driver-assistance technologies.

In November 2021, Tesla recalled close to 12,000 vehicles that were part of the beta testing for fully autonomous cars. This was due to most vehicles suddenly activating the emergency brakes.

Is Kenya Ready for Self-Driving Cars?

Kenya appears to be far away from adopting self-driving cars partly because of the country's public transport system.

Despite the fact that the matatu culture gives Kenyans a certain sense of identity, it presents one of the biggest hindrances to self-driving technology.

Further, self-driving cars rely on traffic signage, which at times gets messed up in Kenya. The road conditions further pose a huge risk due to potholes, diversions, and unmarked bends that are not effectively mapped out.

Kenya also does not have proper legislation to guide the adoption, rollout and operations of self-driving vehicles.