Man Proposes To Girlfriend By Setting Himself On Fire

By Lawmi_The_Sports_Guru (self media writer) | 2 years ago The cloth Ricky was wearing (photo courtesy of Daily Mail)

In the name of love, people have done crazy anf weirdest things but for Ricky Ash he decided to take it to notch higher, in an unique and mesmerizing way. 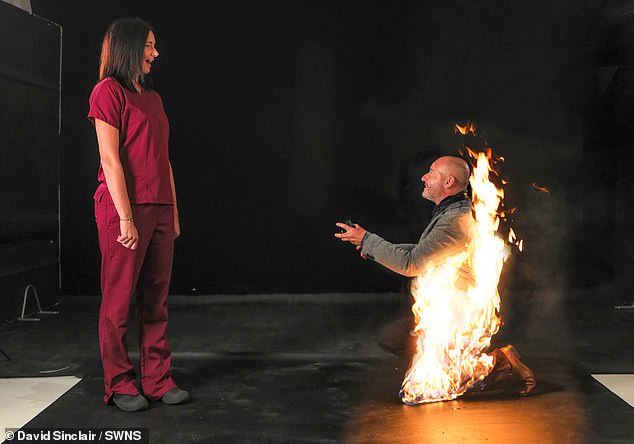 Ricky proposes while engulfed on fire (photo courtesy of dailymail.co.uk)

According to dailymail.co.uk, Ricky, who is 52, decide to surprise his sweetheart a nurse by profession named Katrina Dodson, by setting himself on fire before popping the "will you marry me" question, his girlfriend thinking it was a video shoot of one of his stunts was left dumbfounded but eventually she regained her composure and said yes

Katrina works as a nurse in corona virus unit at William Harvey hospital in Kent, United Kingdom while Ricky is dare devil stuntman, Katrina said that, Ricky had lied to her that he was going to do something which make people smile, unknowingly, she thought he was going to for a photo shoot to many of his stunts but later turned out the intended person to smile was her.

Though the fire was later extiguished before it could inflict any bodily harm, Ricky said his intentions was the fire to last until he popped the question. Do you think it's worth going extra miles and risking your life just to show your love? give your opinion below

Content created and supplied by: Lawmi_The_Sports_Guru (via Opera News )